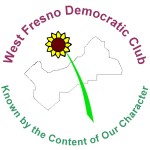 The club was organized and received its first charter in 2002. Barbara Pyle, Chair of the Organizational Development Committee of the Fresno County Democratic Central Committee,  was responsible for the initial organization meeting and set up.

Our logo was developed by Charles Taylor, Steve Smith and Larry Johnson to show a flower growing out of the Fresno Area of California.

Our club has been continuously active since 2002 in the West Fresno community by registering voters, GOTV actions, fundraising events and community education regarding important issues. We maintain numerous contacts throughout this community and are committed to having a positive impact on local politics.