Update: February 15th, 2017 – House Republicans repeal gun limitations enacted by President Obama. NOW it’s EASIER for the TERRORISTS, crazy people and everyone else to get guns! Howrah for the NRA!

The House REPUBLICANS in the US House of Representatives, led by the Speaker of the House, Paul Ryan, are in complete agreement: Terrorists have the RIGHT to purchase GUNS to murder Americans. 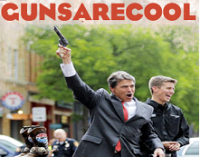 This is obvious because they will not allow a vote to be taken in the US House of Representatives to LIMIT THE ABILITY OF TERRORISTS ON THE NO-FLY LIST TO PURCHASE GUNS IN AMERICA TO MURDER AMERICANS.

IF YOU VOTE FOR A REPUBLICAN to represent your district in California, you are also in AGREEMENT that Terrorists have the right to purchase GUNS to murder Americans. The blood of those innocent victims is on your hands as well as the Representative.