Speaker: Mike Rhodes, author of Dispatches from the War Zone 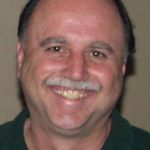 Mike was a founding member of the Community Alliance newspaper and was its editor from 1998 – 2014.

In 2005, he was the recipient of the Project Censored award for the story about the infiltration of Peace Fresno.

Mike was also one of the founders of Community Media Access Collaborative that established a Public Access TV channel on the Fresno cable network, and served on the CMAC board of directors for many years.

Mike works on several KFCF radio shows each month including Street Heat, Stir it Up  and Speaking Truth to Empire.  He was also a news reporter for KFCF/KPFA, reporting on events in the Central Valley.

The work he’s done led to the writing of Dispatches from the War Zone, his 2016 book about homelessness in Fresno.

Mike has written extensively about homeless issues in Fresno since 2002.  This coverage has led to an awareness of the issue and changes in city and police policy.  The stories he wrote and photos he took led to the lawsuit against the City of Fresno, because they were taking and immediately destroying homeless peoples property – a violation of their constitutional rights.

Mike left the Community Alliance newspaper in 2014 so that he could focus on writing this book.

It is his belief that the numerous articles he’s written on the homeless issue are brought together in this book, putting them into the necessary context to tell the complete story about this important issue.

Not only does it provide details about what has happened, it points to a clear path for ending homelessness.  Another world is possible.